After slight delay, Pritzker shows his hand, naming Illinois Gaming Board chair and board member 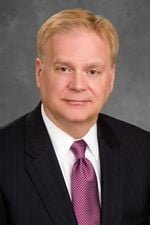 Gov. J.B. Pritzker finally has a new Illinois Gaming Board chair, and a complete five-person board to oversee the largest gambling expansion bill the state has ever seen.

Schmadeke previously served as general counsel to the state comptroller and spent 11 years working for the Illinois Attorney General as Chief of the General Law Bureau.

Anthony Garcia, who previously served as senior counsel for litigation and investigations for the Boeing Company, will serve on the gaming board, according to the governor’s office. He previously spent seven years at the U.S. Department of Justice.

Pritzker on June 28 signed the gambling bill — part of a massive $45 billion capital plan. It included the approval of a Chicago casino, in addition to five other new casinos in Waukegan, Rockford, Danville, Downstate Williamson County and an as yet unchosen south suburban Cook County municipality.

The Chicago casino would be allowed to have up to 4,000 gambling positions — three times more than any of the state’s 10 existing casinos, most of which will see their maximum number of positions jump from 1,200 to 2,000.

The money from the proposed Chicago casino would be split in thirds among the city, state and the private owner, with the city’s cut earmarked for police and fire pensions.

The legislation opens the door to video gambling machines at larger truck stops, and to slot machines at O’Hare and Midway airports. And after a feud between billionaire Rivers casino executive Neil Bluhm and online fantasy sports-betting companies DraftKings and FanDuel, it also introduces legal sports wagering to Illinois.

Casinos and horse racing tracks — which now will be able to offer slot machines and other games of chance — will be able to apply for the $10 million sports betting licenses and begin laying odds as soon as they’re approved by the Illinois Gaming Board, which regulates all state gambling.

The gaming board will meet on Thursday for its monthly meeting.