Are diners really 6 feet apart at suburban restaurants? Officials are getting few complaints. 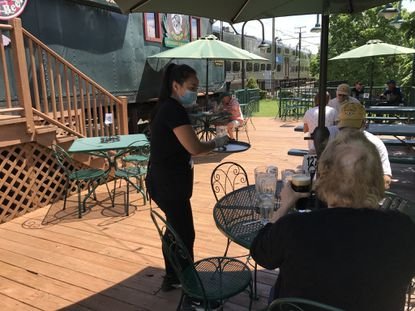 With alfresco dining entering its second week, some suburban towns and health departments are reporting few complaints against establishments for not following adequate social distancing rules.

Restaurants and bars across the suburbs have been bustling since they were allowed to reopen for outdoor eating and drinking May 29 with limits on how many patrons they can accommodate at a time.

The state’s Phase 3 guidelines on outdoor dining include allowing up to six people at a table, spacing tables 6 feet apart, and requiring servers and employees to wear masks and wash or sanitize hands frequently.

“We have recorded less than 10 complaints — from patrons and employees — regarding restaurants since May 29,” said Karen Ayala, executive director of the Du­Page County Health Department. “We are following up directly with the businesses to ensure they are fully informed of the public health guidance and restrictions. Our goal is to achieve compliance, not to issue violations.”

“It looked like a typical summer Saturday in downtown Naperville this weekend,” Christine Jeffries, president of Dine Naperville and Naperville Development Partnership, said about the traffic at downtown eateries. “The restaurant reopening has certainly had an enthusiastic welcome. Everybody seems to be very cognizant. … People are wearing masks, social distancing. We’re keeping an eye on folks.”

Jeffries said that of the roughly 300 restaurants in town, many don’t have outdoor space to offer dining. To help those eateries, officials are considering opening up Naper Settlement as picnic grounds starting next week. Naperville restaurants would be allowed to set up food tents, carts or trucks there for free.

Downtown Arlington Heights opened for alfresco dining June 3 with restaurants sprawling onto sidewalks and a portion of the street to expand seating. Officials say they went to “great lengths” to ensure owners and customers adhered to social distancing protocols. No complaints have been reported.

“Mostly 99% has been positive feedback from residents, business owners and those patronizing,” said Charles Perkins, village director of planning and community development. “We do have police officers present at various times patrolling.”

A few complaints have been lodged about how some businesses are handling social distancing, but officials simply reminded the owners of the rules.

“It’s an adjustment period,” Rowe said. “Sometimes people have to be reeducated about wearing the masks. For the most part, everybody has been compliant. Most people are interested in making it a fun, safe experience for all involved.”