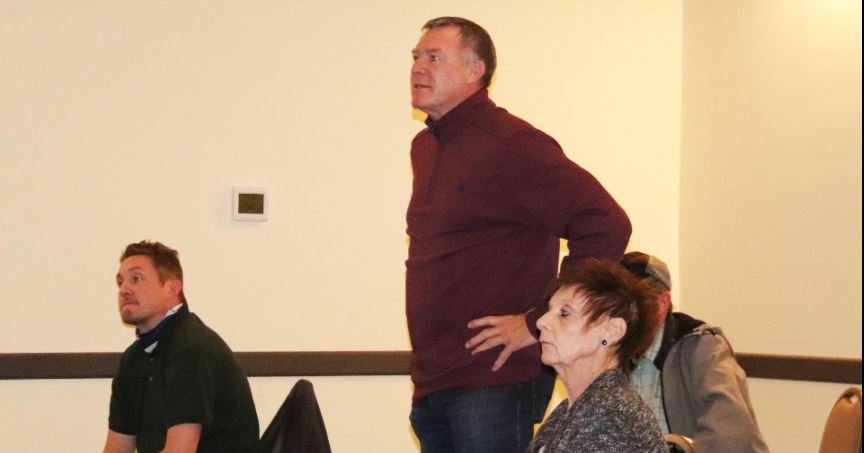 Most of the Pontiac City Council meeting was cut and dry with little issue. The governing board approved seven items and listened to some project information.

And then came Public Comments at the end of the open session.

Although there really weren’t fireworks, there were three tavern and restaurant owners who expressed their dissatisfaction with the governor’s recent decree regarding the shutting down a portion of these businesses.

Region 2, which includes Livingston County, was the final area to be given stricter mitigations regarding the spike in coronavirus cases. The outburst in positive testing numbers has risen throughout Illinois 11 regions and now all are facing restrictions.

Included in these mitigations is not allowing for indoor dining and tavern service.

David Lindsey, owner of David’s Food and Spirits, asked Mayor Bill Alvey what his stance was on the mitigations as they pertained to the restaurants and bars. Alvey’s response was that the city wants to abide by the guidelines.

“If I come out and make a statement here, I expect everyone who works for the city to follow what I said,” Alvey said. “And the governor expects us to follow what he is saying, and he is the head of our state.

The orders for taverns include no ordering, seating or congregating at the bar, no indoor service and closing time is 11 p.m. with opening at 6 a.m.https://286670f76b15e8b9c17e2339e7b951d6.safeframe.googlesyndication.com/safeframe/1-0-37/html/container.html

Restaurants must also close by 11 p.m. and not open before 6 a.m. and there is no indoor dining, among other things.

“Once again bars and restaurants are targeted,” said Sherry Elliott of Elliott’s Corner Junction. “What are the consequences if we decide to stay open as a business? I just want to know if we’re going to be threatened with our liquor license being taken.”

A matter that was brought up was the fairness in allowing gambling to continue. Elliott pointed out that her business can stay open for those gamblers on the state-licensed machines.

But the point circled back to what would the city in case taverns and restaurants remained open.

“What will you do to us as the mayor?”

Alvey tried to drive home the point that the city will be following the guidelines, but that businesses have to make their own call.https://286670f76b15e8b9c17e2339e7b951d6.safeframe.googlesyndication.com/safeframe/1-0-37/html/container.html

What the mayor can do, if he so chooses as liquor commissioner, is to pull the liquor license for such businesses for a temporary or permanent time frame. There is also the possibility of the Livingston County Health Department coming in shutting down a business.

Police Chief Jim Woolford pointed out that the state says to issue a warning letter must for the first complaint, and then another warning letter on the second complaint. After that, he said, the state can go after licenses.

He also reiterated that the health department has the authority to shut business down.

Woolford did say that Pontiac Police will not take someone to jail, but he doesn’t know what Illinois State Police will do.

“Our function is to keep you guys in business,” Woolford said. “We asked the health department to allow us to enforce (the mask mandate) with the purpose being that we then can control what happens.

“Our role is not to go in and start looking at violations. We are hoping people will do the right thing. … I’m telling you guys as the police department, I’ll never order my officers to go in and start arresting people or using force because you’re exercising your right to defy.

Justin Fry of Pub 13 was also in attendance showing concern for his business.

“We came in tonight to voice to you how frustrated we are because, once again, it seems the one target they aim at are bars and restaurants,” Elliott said.

“Let’s see how it works out before we get carried away,” said Alvey. “I don’t want to threaten anybody.”