Coronavirus In Illinois: Some Hit Casinos One Last Time Before They Close, Along With Museums And Theaters, Across Illinois As Virus Mitigation Effort 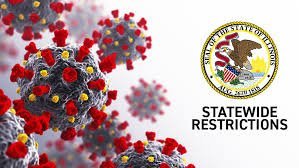 Get ready for more restrictions to take effect Friday in Illinois.

Pritzker said earlier this week that new statewide restrictions will go into effect on Friday; including tighter limits for retailers, and requiring museums, theaters, and casinos to close, though he stopped short of declaring a new stay-at-home order.

The governor said the new restrictions are based on a simple premise: “If you don’t need to do it, don’t.”

As CBS 2’s Jermont Terry reported, some people were hitting the casinos one last time Thursday night. As the clock ticked and Illinois prepared for the renewed restrictions, the some were greeted with a huge shock as they pulled into the parking lot at Rivers Casino in Des Plaines and found a lit sign reading, “Temporarily closed as of November 19 at 11:00 p.m.”

“And then upon pulling up is when I actually found out that they were going to be closed,” said Michael Rivera. “So I had to reread. I thought it was like something, oh, they just forgot to like fix an old post.”

Rivera was one of many who were either placing a bet or trying their luck one last time before the casinos shut down indefinitely – due to the surge of positive cases across the state.

As casinos lock up for now, they join a list of businesses ordered to close, such as movie theaters and other entertainment spots.

“I been doing what I need to do to protect myself from it,” Rivera said.

Yet statewide, the positivity rate has hit record highs. Hospitalizations are already surpassing what we saw in the spring.

Under the new Tier 3 resurgence mitigations, retail businesses including big-box stores like Target and Walmart, will be limited to 25 percent of normal capacity, while traditional grocery stores and pharmacies will stay at 50 percent capacity.

Salons, barber shops, and other personal care services where clients and employees can wear masks the entire time can stay open at no more than 25 percent capacity. Services such as facials and beard trims, where people must remove their masks, must be suspended.

Casinos, museums, and theaters would be required to close altogether. Video gambling machines statewide also would have to shut down.

Gyms would be allowed to remain open, but group classes would be prohibited, leaving them only with the option for scheduled individual workouts.

Rivera has not been going to the gym.

Meanwhile, hotels are required to allow those staying to enter only, and yes, that Thanksgiving gathering should be fewer than 10 too.

Indoor dining and bar service have already been banned statewide for some time. Outdoor and ventilated tent service are still permitted.

And while many people might be experiencing COVID fatigue, you’re asked to remain positive, but test negative.