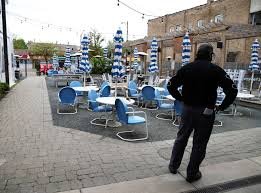 The longer a shutdown of a sector of the state’s economy because of COVID-19 mitigation orders, the more significant the overall economic loss, especially if its’ prolonged for six months.

Bars and restaurants across the state are again under prohibitions of serving indoors with local officials enforcing Pritzker’s orders, impacting major parts of the industry’s revenue stream.

Nicolas Paz, owner of Azteca Mexican Restaurant in Springfield, said he’s yet to be shown that restaurants and bars are where outbreaks are occurring.

“I don’t think we are the problem. We’re just trying to survive during this time,” Paz said.

In the first stay-at-home order issued by Gov. J.B. Pritzker in March, University of Illinois Springfield Professor Kenneth Kriz said credit card receipts were down 60 percent for restaurants in Sangamon County. While there may be different factors elsewhere throughout the state, he said there are likely similar losses.

Kriz said the longer mitigations are in place for more than four to six months, the larger the economic toll will be. He also said the losses could be compounded for communities along the state’s border with other states that may not have as strict mitigation.

“For border counties, I would think that the economic effects would be even stronger,” Kriz said. “People have alternatives. They can go across state boundaries and participate in activities they couldn’t otherwise here.”

“What is frustrating to me is that we as small businesses have to shut our doors and yet other businesses like big corporations have their doors open,” Paz said.

Dr. Vidya Sundareshan of SIU School of Medicine said while they believe increased exposure is happening at bars and restaurants, they can’t prove they’re places of outbreaks.

“It’s very hard to prove that this is where it came from, this is how the infection was acquired,” Sundareshan said. “The epi-link may not always be established.”

Aurora Coffey, owner of Luminary Kitchen & Provisions in Springfield, said that is what makes compiling with orders more frustrating.

“But it is tough when there’s not exact data or numbers to say it’s happening there, in these places, and you drive by these big box stores and you see it’s packed,” Coffey said.

Local communities across the state are enforcing Pritzker’s prohibition of indoor service at restaurants and bars.