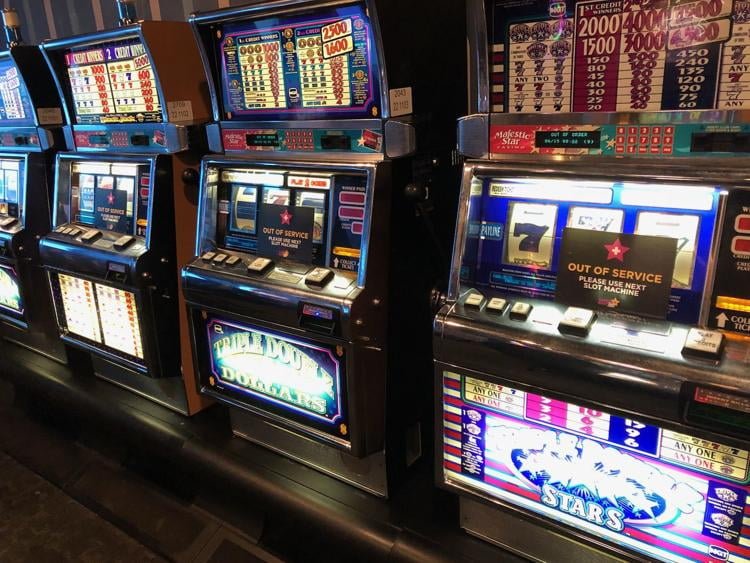 It’s an industry unaccustomed to facing the long odds usually experienced by its patrons.

The COVID-19 pandemic has turned the tables on Midwestern gambling establishments, threatening to sap a collective billions of dollars from state and local economies.

Casinos and gambling parlors that usually enjoy exponentially favorable odds are now enduring a massive revenue bust that goes far beyond the near economic ruin being experienced by the establishments themselves.

Throughout the Midwest, a losing hand of employee furloughs, some promising to be permanent job losses, and evaporating tax and other revenues is crippling entire local economies and family incomes.

Some Midwestern gambling establishments are just beginning to reopen after months of COVID-19-induced shutdowns, hoping to reestablish a winning hand in economic times that still remain uncertain.

It remains unclear what the new normal will look like for casinos and other gambling businesses that are placing bets for an economic recovery on social distancing, masks and hand sanitizer for staff and patrons.

An analysis by Lee Enterprises reporters in Illinois, Indiana, Wisconsin and Iowa illustrates the long odds:

• In Illinois, where gambling has been suspended since mid-March by state-mandated COVID-19 closures, the state’s 10 casinos lost $100 million by late April, with some 5,000 employees out of work, according to the Illinois Casino Gaming Association.

• From mid-March through mid-June 2019, Indiana casinos cleared $574 million in winnings and generated $184 million in wagering taxes for state and local government. For the same period in 2020, COVID-19 shut down all casinos, yielding goose eggs on financial reports.

• In Wisconsin, where tribal-owned casinos just recently began reopening with new social distancing precautions, Native American tribal governments have been crippled as their major, and in some cases only, source of revenue went bust for an entire season.

• In Iowa, the city of Dubuque is staring down a potential $16 million hit to its municipal budget related to the ripple effects of COVID-19, including $2.6 million from pandemic-forced closure of its city-owned casino.

• Also in Illinois, where more than 36,000 stand-alone video gaming terminals adorn gambling parlors in bars, restaurants and truck stops, operators watched net terminal income rise to $151 million statewide for the month of February. Then COVID-19 closures dropped the house take to zero beginning in mid-March, adding to a litany of other economic challenges for some businesses that literally rely on gambling machine revenue to keep the lights on.

From the scores of workers scrambling to find new jobs to casinos and local governments reliant on gaming revenues for basic survival, the way forward is anything but a sure bet for the Midwestern gambling industry.

For Drew Johnson, of Decatur, located in Central Illinois, COVID-19’s attack on the Midwestern gaming industry has done far more than turn the winning odds against the once heavily favored house of gambling establishments.

Count the fate of about 70 employees among the impending losses.

Johnson oversees 13 Debbie’s Slots and Gaming Lounge betting parlors throughout Illinois, and the pandemic hit at an especially difficult time as he prepared to open a new location in Lincoln, Illinois, near Springfield.

Johnson said he was able to keep those 70 employees on the payroll up until recently. But with a crimp on revenue winnings, furloughs became necessary.

He said his employees and customers are excited about a reopening plan slated for June 26, pending approval by the gaming board.

But so much damage already is done for employees of the Midwestern gambling industry.

Nearly all of about 5,000 workers employed by Northwest Indiana casinos were furloughed — and no longer receiving a paycheck — within three weeks of the state’s March 16 casino shutdown as COVID-19 swept the Hoosier state.

It’s not that employees didn’t understand the risks COVID-19 posed and the steps taken to safeguard the public.

“I have COPD, diabetes and fibromyalgia, which weakens my immune system,” Indiana Grand Casino bartender Terri Mitchell said. “I’m terrified that if this virus gets me, I won’t see my grandbabies grow up.”

But the economic challenges faced by scores of employees will be an arduous reality from which to recover.

One of Northwest Indiana’s biggest casinos, Horseshoe, shuttered during the COVID-19 crisis right on the Indiana-Illinois border with Chicago.

Tony Rodio, CEO of Horseshoe parent Caesars Entertainment Corp., said the company maintained employee pay and benefits for two weeks following the March 16 closing of the state’s casinos, but Ceasars could not sustain those payments indefinitely.

But in May, it informed the state that it planned to permanently lay off about 600 workers at the casino and related hotel and spa complex.

Services and ways of life

For 241 Native American tribes — including 11 in Wisconsin — that operate casinos, the COVID-19 pandemic has been especially devastating, all but wiping out tribal government units’ primary sources of income.

With every casino shut down for at least part of the spring and many still not open, those tribes stand to lose about $22.4 billion — more than half their projected revenue — this year, according to the National Indiana Gaming Association.

“Gaming for the most part is what we survive on,” said Ernest Stevens Jr., a member of Wisconsin’s Oneida Nation and chairman of the National Indian Gaming Association. “In a lot of cases, if we don’t have gaming, we don’t have dollars. We don’t have a tax base.”

Wisconsin’s casinos generated nearly $1.3 billion in gross revenue based on nearly $17.6 billion in wagers made in the 2018-19 fiscal year, the Wisconsin Department of Administration reports.

Now, that gaming well for revenue has hit a major dry spell.

“It’s really pretty much crippled our tribal economy,” said Marlon WhiteEagle, president of Ho-Chunk Nation, whose six Wisconsin casinos generate more than 80% of the annual operating revenue for tribal government. “The casinos are really the bread and butter of our funding.”

WhiteEagle said the Ho-Chunk Legislature has delayed approval of the next budget, which would normally go into effect July 1, to allow for an assessment of the impact as casinos begin reopening.

“It’s hard to budget when we don’t know what actual revenue we have to budget with,” WhiteEagle said.

Jeff Crawford, attorney general for the Forest County Potawatomi Community, said the loss of more than $70 million in net revenue from the tribe’s two casinos has wiped out many government services and led to furloughs for 60% of its employees.

“We’ve had to cut our tribal government in half,” Crawford said. “We essentially don’t have an effective operating budget for providing services.”

The tribe has suspended dividend payments to its 1,700 members, including more than 800 who live on the 12,000-acre Potawatomi reservation in Northeast Wisconsin.

“None of our tribal members are getting rich from the dividends, but if they are solely relying on those dividends, they are being impacted,” Crawford said.

Local government agencies throughout the Midwest that rely on casino revenue for programs and services also are trying to gauge the full extent of COVID-19’s losing hand.

The state-mandated closure of Northwest Indiana’s casinos prompted the mayors of that region’s urban core cities to immediately reduce spending on projects and services.

While Hammond Mayor Thomas McDermott Jr., East Chicago Mayor Anthony Copeland and Gary Mayor Jerome Prince all agreed the loss of a single month of gaming revenue wouldn’t break their budgets, Indiana’s three-month casino shutdown, along with soaring unemployment caused by COVID-19, have each of them concerned about the future.

“I pray on bended knee that the industry will come back,” Copeland said one month into the casino shutdown. “But I’m far from foolish. I know that if they cranked up tomorrow, it still would take months and months before people that have been affected across the nation who go to these properties will have disposable income.”

Copeland’s city, in part, relies on casino revenues to fund the charitable endeavors of a major nonprofit foundation, which then funnels revenue to churches and other not-for-profit services.

In Iowa, financial hardships also are felt by the charity sector that normally gets a cut of casino revenues.

In Scott County, Iowa — home to two of the four Quad-Cities — the license holder for Isle of Capri in Bettendorf handed out grants in recent weeks to 50 nonprofits for a total of $510,849 in COVID-19-related relief.

“We’re going to have to figure out how to live with this virus. It’s not going anywhere,” Timmons said. “We can be smart and try to do the right things, but we’ve got to get things back to near normal as we can and hope for that vaccination.”

Making a run at new fortunes

June began with a hopeful run at new fortunes for part of the Midwest gambling industry, as casinos began to reopen in Indiana, Wisconsin and Iowa.

All were proceeding with caution, with many casino entryways appearing more like a cross between wellness clinics and customs checkpoints than gateways to high-stakes wagering.

Potawatomi Hotel & Casino in Milwaukee is only hosting existing Fire Keeper’s Club members, who each can be accompanied by one guest through an online reservation. Guests must bring their own masks, and staff also must wear face coverings.

Guests and employees must have their temperatures taken at the door, and body temperatures exceeding 100.4 degrees bar entry to would-be patrons.

Indiana casinos began reopening June 15 after complying with an extensive set of rules and regulations to limit potential COVID-19 spread.

Every employee and guest must be quizzed about recent travel, contacts and health symptoms, along with undergoing temperature checks and sanitizing hands.

Once inside Indiana casinos, roughly every other slot machine and sportsbook kiosk is turned off to encourage social distancing, and each machine is required to be cleaned between patron use.

Table games are limited to three players for blackjack, four for roulette and six for craps.

All table game wagerers and operators must wear face masks.

In Wisconsin, Ho-Chunk Gaming reopened its top-earning Madison casino May 27 with less than a third of its 1,300 slot and poker machines, in accordance with Dane County’s public health guidelines.

“The first day was pretty amazing,” Ho-Chunk General Manager Daniel Brown said. “The line snaked out to the end of our parking lot.”

Additional machines there were slated to reopen once clear plastic protective dividers could be installed.

Show and event venues at many Midwestern casinos remain shuttered out of safety concerns.

As casinos have reopened in Iowa, workers associated with the event space have yet to return from furlough.

It’s not yet known when weddings, concerts or business gatherings may resume or jumpstart in a meaningful way.

And the optimism behind some reopenings is tempered with the reality everything is scaled back. The prospects of a true recovery remain murky.

That outlook is even more unclear in Illinois, where the state’s gaming board is still developing reopening protocols.

“Our first priority during this period has been and will continue to be to protect the health and safety of Illinois gaming patrons, gaming employees … and all Illinoisans and to ensure the safety and training of Illinois gaming,” Gaming Board Administrator Marcus Fruchter said during a June 11 public meeting.

Anthony Jones, of South Holland, Illinois, was among numerous Illinois gamblers crossing the state line into Indiana on Monday as the Hoosier state’s casinos reopened and Illinois establishments remained closed.

He didn’t mind undergoing a temperature check or other safety precautions at Majestic Star Casino in Gary. Jones also was wearing a mask.

“I’m kind of used to it now,” he said. “We’ve been wearing them since March. It makes you feel safe, I guess.”

That feeling of safety is something nearly all Midwestern casino operators are wagering will bring back customers and revenue.

Much is riding on it.