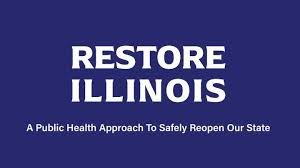 CHICAGO — Illinois health officials announced new restrictions on group sizes, bar and restaurants and more will be coming to Will and Kankakee counties starting Wednesday, after the COVID-19 positivity rate in the region passed state limits for a third consecutive day Monday.

According to the Illinois Department of Health, the 7-day COVID-19 test positivity rate in the South Suburban Region which includes Kankakee and Will counties reached 8 percent on August 19. On Monday, officials reported it remained above that level for a third day in a row as of August 21, with a positivity rate of 8.3 percent.

The state’s “Restore Illinois” plan mandates any region with a positivity rate of 8 percent or more for three consecutive days be subject to additional mitigation measures meant to prevent the spread of COVID-19.

In a press release sent out Monday evening, health officials said the new restrictions will be put in place in the South Suburban Region starting August 26, including:

Officials said schools will not be included under the new restrictions, which will remain in place for at least 14 days. If the positivity rate drops below 6.5 percent after 14 days, they could be lifted, but if the rate is above 8 percent at that time additional restrictions could be put in place.

Governor JB Pritzker and health officials implemented new restrictions in the Metro East region outside St. Louis, including limits on group sizes, room capacities and bar and restaurant hours, on August 18 after it passed the same threshold. The positivity rate remained above that level as of Friday, coming in at 9.4 percent.

If the level does not drop below 8 percent, the IDPH said Monday new restrictions would be added to the Metro East region starting September 2.

Will County reached state “warning” levels with 92 cases per 100,000 residents and seven deaths during that period. It should be noted the county-level data used for these measurements lags behind the reported regional data by six days.

Across Illinois, the IDPH reported 1,612 new cases of COVID-19 and 8 coronavirus-related deaths were confirmed over the past day Monday. Officials estimate 95 percent of confirmed cases have recovered.

The statewide positivity rate from August 17-23 remained at 4.2 percent, and has been around four percent since late July. The 7-day testing average rose from around 37,000 daily tests at the end of July to 48,000 daily tests as of Monday.

Both coronavirus hospitalizations and hospital resources remain within the state’s guidelines, with 1,529 patients hospitalized with COVID-19 as of Sunday night, including 334 in intensive care and 141 on ventilators.