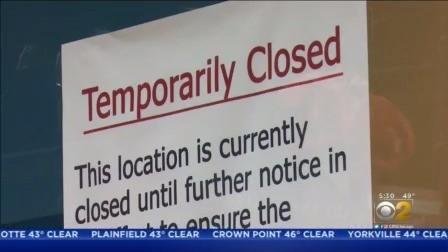 Staggering numbers in a new report obtained by CBS 2 show just how hard the coronavirus is hitting the Illinois economy.

Morning Insider Tim McNicholas got a copy of the findings, which will be released to the public later Thursday.

Bibi Hernandez isn’t filing nails or doing hair at her Humboldt Park salon. Instead, she’s rearranging the shop, planning for a reopening someday with social distancing guidelines, and collecting unemployment.

“Sitting back and collecting money, I’m not sure how the government is able to pay for all of it,” Hernandez said. “So as a business person, I’m worried about the economy.”

Hernandez knew she wasn’t alone, but now a study from the Illinois Policy Institute puts it into numbers. The report estimates the state’s economic activity has dropped more than 7.4% in the first quarter of 2020, costing the state about $183 million a day.

Orphe Divounguy is chief economist for the libertarian-leaning think tank. He says the group used data from the U.S. Department of Labor and the Bureau of Economic Analysis to forecast the pandemic’s impact.

“The number of people losing their jobs [in Illinois] is now reaching close to one million people,” he said.

“The numbers will be published at some point and you’ll be able to see. I think that… I mean this has had a terrible toll. On the entire United States and of course on the people of Illinois. As to what it’s costing us, beyond the cost to the state, this has cost so many families so much,” Pritzker said. “Their savings, many of their savings are gone. Many of them have businesses that they’re trying to keep alive. Many of them have lost their jobs or are danger of losing their jobs soon.”

The Catch-22 is that re-opening too much of the economy too fast could lead to more COVID-19 cases, which would create another devastating hit to an already dire economic landscape.

The governor says he’s basing his decisions off the advice of scientists as he developed a five-phase plan to reopen the state.  There is no timetable to get there.  However, nothing will change until after the latest stay at home order expires at the end of the month, if then. One thing is clear — business owners like Hernandez won’t re-open until June at the earliest.

The governor also said the state will need to rely heavily on federal assistance to get through this.

“That’s one of the reasons why so much help needs to come from the federal government,” Pritzker said. “They are the ones that have monetary policy, have the levers they can pull that are so much different from what states can do. We are going to need help there’s no doubt about it, in order to deal with the cost of this pandemic.”