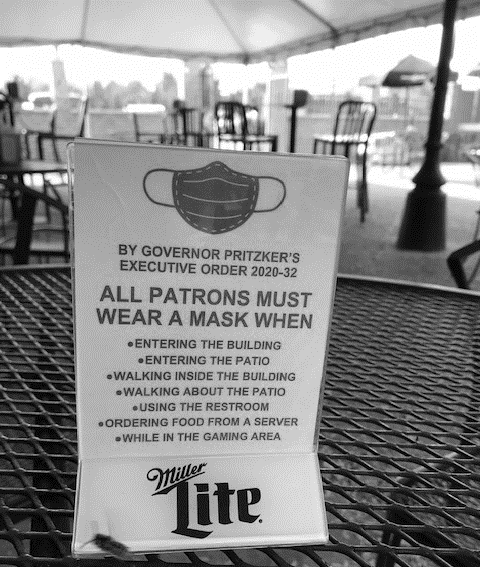 “Could I have five more ketchup packets?”

A customer at Parkside Pub in Huntley was just served a burger and fries and caught the server’s attention. The customer figured two ketchup packets on her plate weren’t enough. The number of ketchup packets served to a customer won’t break a restaurant’s budget but it’s part of the complete picture of COVID related costs for restaurants and how restaurants struggle to stay on budget. It also represents how a restaurant’s staff is confronted with the daunting task of operating a business with a myriad of public health rules to follow.

Like all other restaurants in Illinois, Huntley’s Parkside Pub was ordered to close its doors to indoor dining when the pandemic closure orders were issued. Since then, it’s been a constant learning experience, but with the help of the community, they have continued throughout. (Photo by Stew Cohen/Sun Day)

The staff at Parkside Pub welcomed a Sun Day visit for a discussion of how they were affected when their business was closed down on St. Patrick’s Day and how they are operating now under COVID mandates in Phase 4.

Early on, restaurants including Parkside Pub were not considered essential businesses by Governor JB Pritzker’s office in the phase re-openings. The response by JR Westberg, co-owner of Parkside Pub, was the same as that of other restaurateurs.

“It was a Sunday before St. Patrick’s Day, the word came out that after tomorrow, close of business, we’ll be closed to take out only. That was quite a shocker to begin with…and the retool of the entire business was a new learning experience and in each phase we kept reaching, getting closer to normalcy was a new change, a new tool for how we’d have to operate,” Westberg said.

The outpouring of support from regular customers came as welcome relief for Westberg and his staff. Jess Smart, a bartender and server at Parkside Pub, saw in tangible ways how loyal customers kept the glimmer of hope alive for her co-workers during the ten weeks of shut down.

“People that were our regulars would come to the window for carryout. They’d sometimes give $100 tips because they felt bad we were closed down. This has been their place and they would support us. People would come and just get chicken tenders and leave $50 because they wanted to support us. A co-worker would do deliveries, twenty to thirty a night,” Smart said. The staff hoped for better days ahead and as Smart remembers, they sometimes played games like Yahtzee just waiting for their customers to return. “I lost money being on lockdown, but I still survived, thanks mainly to the regulars of Parkside Pub,” Smart said.

Outside on the patio at Parkside Pub, Westberg and Smart specifically thanked their regulars for sticking with them and thanked the staff for being the family that never wavered. Don’t mistake their display of gratitude for how difficult it’s been navigating the ship through choppy water at times. When the state finally eased up on restaurants and outdoor seating such as the Parkside Pub’s patio, some regulars were afraid to bring their kids.

“We used to have kids running across the patio playing football in the alley. They’d be here for hours,” Smart said. This brings up the question of mask wearing.

“Some customers are afraid because some people don’t have their masks on,” Smart said. “I can ask those customers to wear their masks.”

For uncomfortable customers, Smart asked if they’d prefer moving to a table further away from them. Turns out the customers allowed the staff to move their table or just move them to another table and they sat for two hours and didn’t have a further problem.

“I don’t want anyone to leave. I don’t want anyone not to come in here because they’re scared that someone is not wearing a mask,” Smart insisted. “We’ve gotten some of our regulars back because some people are over it, I guess.”

As Illinois moved through phases toward a gradual reopening of non-essential businesses including Parkside Pub, Pritzker pointed to strict health department rules. The rules spelled out social distancing, mask wearing, hand washing, quarantine, sanitization methods, temperature checks, and more. What may seem insignificant in the scheme of all things about food service, those ketchup, mustard, and mayo packets played a symbolic role in the throwaway items very important in the COVID world of restaurants. Smart knows she must throw away unused packets to protect customers from getting any of the unopened packets once the packets are on someone’s table. She’s not going to have her staff wipe down individual packets with a bleach towel. Parkside Pub servers are also setting up tables with disposable plastic cups, plastic utensils, and napkins. How should Smart approach her customer and ask her to request only what she’ll use?

“I am okay with the plastic myself. I’m honest with you. I’m not grabbing your glass and bringing it back to my tapper and refilling it. We’ll throw the cup away and give you a brand new cup. I’m only touching it once. You’re touching it, and then it’s going right into the trash,” Smart said. Straws, wrapped in paper, are also a one-time use.

“Some of the customers will say ‘I just came from so and so and they have real silverware,’ but I say everything is to be thrown away. We don’t use glassware, all plastic and that’s it,” Smart said. Servers are wiping down tables as soon as the customers at that table get up to leave. Sanitizer wipes are used everywhere. Every morning, Westberg has the staff take their temperatures and every six hours per request by the McHenry County Department of Health they’ll go and do it again to make sure no one has a temperature. He points to communication with the McHenry County Department of Health. The staff will all wear masks and they’ll wipe down the menus, tables, and chairs.

When the day comes where a vaccine for COVID or a credible treatment is developed and our lives return to normal, the staff and management at Parkside Pub promise to hold a thank you event.