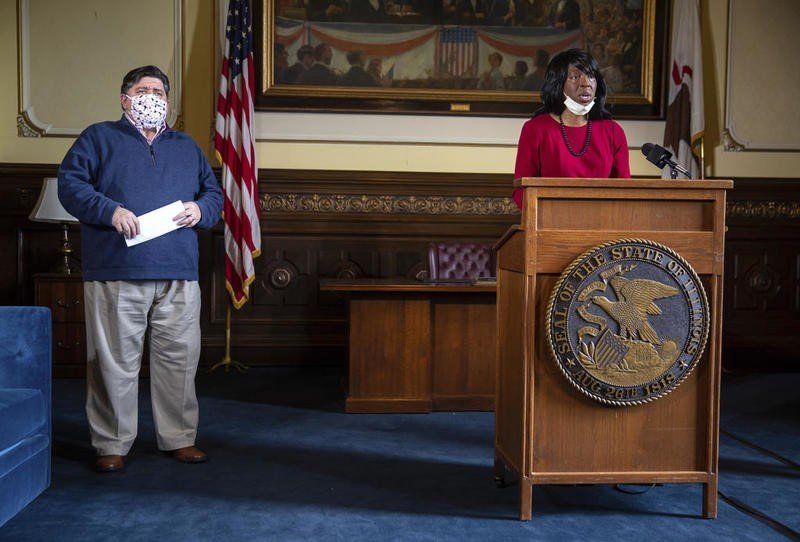 All four of the state’s health regions will move into Phase 3 of the Restore Illinois plan Friday, with loosened restrictions on businesses, restaurants, park districts, state parks, and allowing for gatherings of groups of 10 or fewer people, Gov. JB Pritzker said Thursday.

“Let’s not move backward but, instead, let’s move forward together,” Pritzker said.

Chicago will not move into Phase 3 on Friday, according to Mayor Lori Lightfoot, and instead will advance Wednesday, per the city’s plan.

Once Illinois moves into Phase 3, the soonest that any of the state’s four health regions can move into Phase 4 will be after a period of 28 days, according to Restore Illinois guidelines, Pritzker said. That would be June 26.

Thursday, the Illinois Department of Public Health reported 1,527 new cases of the coronavirus and 104 additional deaths. That brings statewide totals to 115,833 confirmed cases and 5,186 deaths.

“Our dedication to this population has never wavered,” Ezike said.

Ezike stressed the importance of reporting new cases in long-term care facilities to the IDPH as soon as they are identified. Facility leaders are expected to notify residents, staff and families within 24 hours of diagnosis of a new case, she said.

Pritzker said the IDPH filed a new rule requiring each nursing home to develop its own individualized testing and plan, and document an established relationship with a testing lab, whether a commercial lab, a local hospital or state labs.

Pritzker said nursing homes that don’t comply with the rule would face consequences.

“It’s typically a fine, but it can involve their licensing, too,” Prtizker said.

As of Wednesday night, there were 3,649 people hospitalized with COVID-19 in Illinois. Of those people, 1,009 were in intensive care units, and 576 were on ventilator support, Ezike said.

Illinois conducted 25,993 COVID-19 tests in the 24 hours leading up to Thursday afternoon for a total of 829,966 tests conducted. The state’s rolling seven-day positive testing average is 8.3%.

As of Thursday afternoon, the Northeast region (Cook, DuPage, Grundy, Kane, Kankakee, Kendall, McHenry, Lake and Will counties) reported a positivity rate average of 14.2%. The region reported an average of 27.9% of medical/surgical beds available, 31.4% of ICU beds available and 67% of ventilators available.

The North Central region (Bureau, DeKalb, La Salle, Lee, Ogle, Whiteside, Carroll, Boone, Winnebago, Stephenson, Putnam and Jo Daviess counties) reported a positivity rate rolling average of 6.9% on Thursday. On average, the region has enough medical/surgical beds to accommodate a 38.7% surge in COVID-19 cases. The region reported that 42.2% of ICU beds are available and 59.5% of ventilators are available.

The Central region reported an average positivity rate of 2.6% on Thursday. On average, there was an availability of 47.9% of medical/surgical beds, 50.8% of ICU beds and 74.9% of ventilators.

The Southern region had an average positivity rate of 5.1%. On average, there was an availability of 46.2% of medical/surgical beds, 41.7% of ICU beds and 79.5% of ventilators.

Threshold to move into Phase 3/Phase 4

In order to move into Phase 3 of the Restore Illinois plan Friday, each of the state’s health regions had to ensure that testing was available for hospital patients, healthcare workers, first responders and people with underlying health conditions.

Testing also needed to be made available to the residents and staff of congregate living facilities, according to the plan. A system for COVID-19 contact tracing and monitoring must be in place and able to respond 24 hours after diagnosis.

In addition to these requirements, each region must report an average positivity rate of 20% or lower, increasing no more than 10 percentage points over a 14-day period.

Regions also must report no overall increase in hospital admissions for COVID-19 for a period of 28 days, meaning hospitalizations must decrease or remain stable.

Finally, each region must prove available surge capacity of at least 14% of ICU beds, medical/surgical beds and ventilators.

Pritzker said in order for a region to move to Phase 4, the same metrics must be hit over 28 days for testing positive percentages and hospital/ICU/ventilator availablity. Contact tracing and monitoring within 24 hours of diagnosis for more than 90% of cases in region must be met, along with testing availability in a region regardless of symptoms or risk factors must be met in order to advance to Phase 4.

The 28-day timer starts over on Friday for all four regions, Pritzker said.

“The goal is to get to a much higher number [of tests],” Pritzker said.