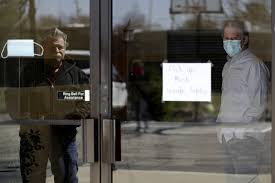 ROCKFORD — Starting Saturday, Rockford-area bars and restaurants will revert back to outdoor dining and curbside pickup only. Attendance at funerals and weddings will be capped at 25, and party buses will be banned because of a spike in COVID-19 cases.

Gov. JB Pritzker made it official Wednesday as he announced new rules for Region 1, a geographic area of the state containing nine counties — rules that can be lifted if and when local positivity rates drop.

The new regulations require some businesses and services to restrict day-to-day operations more than their counterparts in other parts of the state where COVID-19 is presenting less of a threat to public health.

Of the state’s 11 regions, eight have seen COVID-19 cases go down in recent weeks.

“That is really good news,” Pritzker said. “But not every region is succeeding.”

Now, Region 1’s success and that of dozens of local bars and restaurants will be determined in the days and weeks to come, the governor said, by its people.

“These mitigation measures can be removed. They can be maintained or even strengthened,” Pritzker said. “The path forward will be up to the residents of Region 1.”

While some bar and restaurant owners and local officials have questioned the state’s decision, Pritzker and Dr. Ngozi Ezike, director of the Illinois Department of Public Health, said they are guided by the science and the data.

“We have seen some of the common themes around where the possible exposures have been for positive cases,” Ezike said. “Bars and restaurants do come up as a common exposure place.

“The goal is not to punish bars and restaurants. The goal is to be able to get these numbers down so that we don’t have rampant infection transmission throughout our community that makes everyone just that much more at risk.”

Region 1 residents can do their part by wearing face masks, encouraging others to wear masks, maintaining social distance and washing their hands.

Over at the Norwegian, a Nordic-themed pub and popular breakfast spot in Rockford’s North End, owner Emily Christiansen and her staff of 18 plan to do just that.

Christiansen also plans to close her dining room indefinitely, a move she does with great trepidation knowing the hardships it will cause among her employees.

“I believe that they are taking measures that they believe will help lower the spread of COVID-19,” Christiansen said. “That’s what they’re doing. … Now, if you ask me how it feels, I feel like it doesn’t line up. Restaurants aren’t allowed to seat indoors, but casinos can be open with limited capacity. You can shop for Halloween costumes all over Target, but you can’t sit at a table 6 feet from your neighbor.”

The government is not doing enough to support small businesses and their employees, Christiansen said, many of whom will be furloughed in the weeks to come.

“They haven’t done nearly enough for hospitality workers that are being made to feel completely dispensable by these decisions,” she said.

Christiansen said she and her staff are accepting the new rules and will work hard to make the most of them.

“We’re not going down without a fight.”