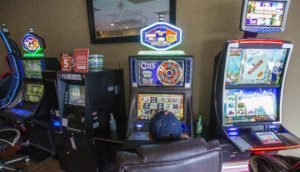 Until now, establishments that offer gaming were limited to five machines. Under a state law expanding gambling in Illinois, they can now be licensed for six.

Mayor Tom McNamara said the city established a threshold, requiring businesses to have a minimum $150 hold — the amount of revenue kept per machine after winnings are paid out — to limit the expansion.

“The state of Illinois in the gambling expansion, approved the potential for a sixth machine for all existing gaming operations,” McNamara said. “So what our council did, I support. We stated that unless machines were at a certain level, they would not be given an additional machine. I support the process and the objective criteria the council laid out.”

McNamara said 45 so far had met the criteria, and more businesses are seeking the expansion.

Legal Director Nicholas Meyer said the expansion means that businesses are authorized to operate 531 gaming machines in Rockford. That remains below a city-imposed cap of 600 gaming machines and also below the increase allowed in the city’s host community agreement with Hard Rock Casino Rockford, which is seeking a license from the Illinois Gaming Board.

Alderwoman Linda McNeely, D-13, and Alderman Natavias Ervins, D-6, opposed the expansion. Ervins said he was concerned about an over saturation of gambling. McNeely said she voted against the expansion in protest of a lack of business expansion in her ward and on Rockford’s west side.
Under a state law, the amount Rockford is charging businesses per year to operate video gambling in the city increased from $25 to $150 per machine, bringing in about $100,000 in new revenue annually, Finance Director Carrie Hagerty said.

An expansion of 45 machines will mean an increase of $6,750 a year for operating them in addition to whatever amount of money they bring in as the city’s share of gambling proceeds. Last year, the city collected $1.7 million as its share of gaming proceeds. Hagerty said it is difficult to predict if the increased number of gaming machines will translate into an increase in revenue for the city.