Southern Illinois restaurants adjust to new round of restrictions 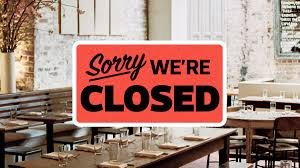 Restaurant owners in Southern Illinois are adjusting to a new round of restrictions requiring the closure of indoor dining areas.

“The feeling on these shutdowns, people don’t want to do them because they don’t think they are effective. That’s what it basically boils down to,” said HD Bean Jewelers Owner Cody Gottman. “It undeniably affects people’s pocketbooks and that’s huge right now.”

Gottman owns a jewelry store in Carmi and although his business hasn’t taken the brunt of new restrictions, he says he’s had enough of it.

“It’s easy for the state to come in and say ‘hey were going to shut you down,’ but what are they doing on the backend to help you or encourage you to shut down?” Gottman said.

The new restrictions went into effect for southerestan Illinois’ Region 5 on Thursday. Governor Pritzker said verbal warnings will be given first. If those are ignored, then possible citations or even the removal of gaming and liquor licenses will be considered.

“I would ask people to try to live by the rules we set. Wear your mask… the truth is that if everyone wore their masks we could get our businesses back open much quicker.” Gov. Pritzker said.

Some restaurant owners in Carmi who wished to speak off camera say its business as usual.

At the Taco Factory in Carmi, their dining room hasn’t been opened since the pandemic began and the owner says her business has taken a big hit.

“The people traveling through town, we miss out on a lot of new business, because people can’t stop and meet people for dinner or try a new place and come inside and see it and get that feel of community,” said The Taco Factory Owner Heather Talley. “I think the restrictions are ridiculous and people are losing jobs and losing money.”

Carmi business owners say they wish there was more direction from the state with the winter months right around the corner.

“I’m jeweler, not a lawmaker, but I’m just telling you from an owner, it breaks your heart for someone outside to come in and say this thing you have worked your entire life for, that you got to shut it down.” Gottman said. “It hurts as a business owner and I know i’m not the only guy saying that.”