Watchdog: Why March was the worst month to lose video gambling revenue 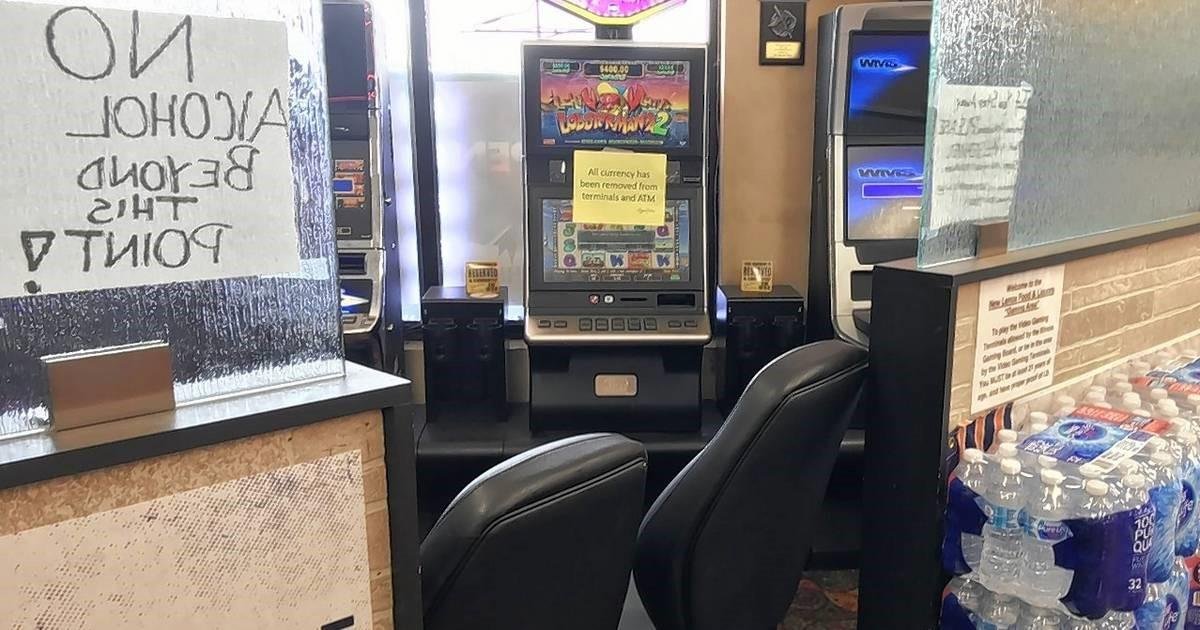 “When you first start out with these, you’re in the hole because they’re taking up table space you would’ve had to serve people,” Remein said. “It took about three years for them to break even and I’d say they’re now about 25% of our revenue.”

With St. Patrick’s Day revelers and NCAA March Madness basketball tournament watchers packed into the bar, March is always the highest-earning month for almost every business in Illinois that has gambling terminals.

Not this March. Not after the coronavirus outbreak closed restaurants and bars to dine-in customers and the Illinois Gaming Board shut down gambling of all kinds the day before St. Patrick’s Day.

Remein’s business alone received $3,300 less this March than it took in for the same month a year ago, a 33% decline. Statewide, revenues from video gambling were off a collective $70 million in March from the previous year, a 44% reduction from the same month last year.

Businesses and the machine operators split 67% of a machine’s profits. The state takes 28% of the profits as a tax while local governments get the remaining 5%, according to state law.

Counties and towns across the state that allow video gambling made a combined $7.9 million in March 2019 from the machines. In the 16 days of operation last month, the machines only generated $4.4 million for local governments.

Lake County received nearly $750,000 from video gambling between March 2019 and February 2020. The county received $30,000 less this March than it did for the same month a year ago. But it’s not the county’s coffers that will be affected by the lost revenue.

“All the proceeds, except a small administration fee, go to a grant program distributed throughout Lake County primarily focusing on gambling addiction through nonprofits,” said Gary Gibson, county administrator. “These months we’re losing are busier months, so they’re going to have a bigger effect on the allocation we will eventually be able to distribute.”

Lake County is in the top 20 among local governments receiving the most tax income from video gambling in the state, but it pales in comparison to place like Springfield and Rockford. Each of those cities received more than $1.7 million from video gambling taxes between March 2019 and this February, according to the state gaming board’s records.

Elk Grove Village uses most of its funds — roughly $450,000 annually — to cover costs of the village’s festivals and summer concert series, the fate of which are undecided for this year. The village is on the hook for $480,000 to bands it booked for the summer concerts. If the village cancels the program, it loses that money.

“We have insurance that covers us in case of weather, but it doesn’t cover a pandemic,” said Mayor Craig Johnson. “I’m in insurance and I can count on zero fingers the number of pandemic insurance policies I’ve sold.”

The state, which made $39.7 million from video gambling taxes in March 2019, collected just $24.7 million last month.

It had been expecting March to be the biggest month ever for video gambling revenue. That’s because last July, the state allowed businesses to add a sixth machine, a 5,000 machine increase statewide. Also, the state started taking 3% more of each machine’s profits.

With COVID-19, the anticipated record-breaking revenue did not materialize.

“You don’t have to be an epidemiologist to see the virus is going to hit our budget hard, a reality that is being visited upon every state,” Gov. J.B. Pritzker said on Wednesday when he announced state finance officials expect the economic shutdown caused by the coronavirus will result in a state budget shortfall of $2.7 billion this fiscal year and another $4.6 billion next year.

“Every state budget is dependent on taxes on income, sales and other sources such as lotteries and gaming for a substantial portion of their state budget,” Pritzker said. “In every state the coronavirus pandemic has substantially disrupted those revenue sources.”

The state’s video gambling revenue is earmarked for its Capital Projects Fund. The governor’s office did not respond to requests for comment about the status of projects planned in anticipation of that revenue.

As bad as March video gambling figures were for the state, April is going to be much worse. The machines will have been completely out of service for the entire month. That means an expected loss to the state of close to $40 million. Local governments can expect a combined loss of more than $7.5 million and the businesses stand to lose roughly $50 million combined.

“It’s an act of God, what are you going to do?” pondered William Bowes, owner of Jake Moran’s in Mundelein. “You can’t cry over spilled milk. We don’t have carryout or delivery, so we’re just doing a lot of cleaning and waiting for the opening day.”

Bowes made more than $100,000 from video gambling machines at Jake Moran’s in the 12 months before March 2020, according to state records. He said that’s roughly 60% of the business’s annual income.

Sports Betting will likely be coming to Illinois in the very near future. Learn how you can help ensure that you are not left out of this initiative!

The Illinois Gaming Board has ordered the suspension of all Video Gaming Operations at all licensed video gaming establishments.

Right now, the shutdown is scheduled to last until April 30th, but the situation remains fluid. The IGB will continue to monitor and will advise us of any changes should they occur.

In the meantime, please be safe. We will keep you informed as new information comes in.

SUBJECT: Thank you for your support of my small business

On behalf of thousands of small business owners and tens of thousands of employees in Illinois, Oregon, West Virginia, Nevada, Montana, Georgia, South Dakota, Louisiana and Pennsylvania, we wanted to sincerely thank you for supporting our eligibility to participate in the Paycheck Protection Program (PPP).

The Small Business Administration’s (SBA) release of revised regulatory guidelines that allow all size-eligible gaming entities to participate in the PPP was long overdue and vital to our small businesses. We are incredibly grateful for your steadfast advocacy in correcting the SBA’s antiquated policy that precluded small businesses that generate revenues from legalized and regulated gaming activities from rightfully qualifying for needed relief under the CARES Act.

There is no doubt that without your leadership and sustained effort to get the guidelines changed, thousands of small businesses and their employees would not have been able to survive the effects of the COVID-19 pandemic.

Your continued support of my small businesses is greatly appreciated.

SUBJECT: Don’t let our Hospitality Business be another Permanent Casualty of COVID-19

The coronavirus pandemic is causing tremendous hardship throughout the world, our nation, and our state. In fact, a new study by economists at the University of Illinois, Harvard University Business School, and the University of Chicago projects more than 100,000 small businesses have permanently closed since the coronavirus pandemic surfaced. My business is currently suffering unprecedented losses through no fault of our own. We certainly do not want to become part of this statistic.

Under the current Restore Illinois plan, the earliest a region can reach Phase 4, which allows restaurants to resume “dine-in” service is June 26th. We believe this timetable grossly underestimates the ability of restaurant and bar owners to safely serve our clientele and underestimates the ability of honest citizens to safeguard their own health. Our small businesses are already highly trained in safe food handling practices and concurrently heavily regulated by public health officials. These facts place our businesses ahead of most other industries in their readiness to meet modified safety guidelines to handle the current COVID-19 situation.

We are therefore respectfully calling for a modification to the Restore Illinois plan to allow restaurants and bars to reopen during Phase 3 rather than waiting until phase 4. This change could be the difference between a path to recovery or being forced to shutter our doors permanently. As a result of the COVID-19 pandemic, of the 594,500 Illinoisans who depend on the restaurant and hospitality industry to make a living, currently 321,000 are collecting unemployment. These individuals desperately need to go back to work, including several people who depend on my business for their livelihood.

Additionally, while closed during the shutdown our small businesses are losing at least $5 million statewide daily in video gaming revenue, in addition to the tens of millions in other revenues from lost food and beverage sales.

Governor, we fully understand the need to protect public health. As mentioned, our day to day activities require us to maintain excellent health and safety standards. We were asked to shut down to make sure our hospitals were not overrun, and we did it. We have achieved the goal of protecting our hospitals. Now, we need you to revisit the re-opening timetable to protect our livelihoods and those of our employees. We need to reopen, safely and with everyone’s health as the priority, as soon as possible. Specifically, we need the assurance that when the business is permitted to open, our video gaming machines will be operational to the public pursuant to proper safety protocols.

The COVID-19 crisis does not have to be an either-or proposition. We have learned a great deal about this virus in the months since the first confirmed cases were discovered in the United States. Working with state and local officials, we can create a safe environment at our businesses. States across the country have shown it is possible to both protect the public while at the same time allowing businesses to reopen. There are many common-sense guidelines being successfully implemented in other states. Surely, we can learn from our neighbors and develop a less restrictive strategy for us in Illinois.

Again, we respectfully ask you to work with us on a modified timetable. Our businesses have been shuttered for far too long. For the sake of our families, our employees, and our valued customers, please reopen Illinois and let us get back to work.

SUBJECT: Thank you for your support of my small business

On behalf of thousands of small business owners and tens of thousands of employees in Illinois, Oregon, West Virginia, Nevada, Montana, Georgia, South Dakota, Louisiana and Pennsylvania, we wanted to sincerely thank you for supporting our eligibility to participate in the Paycheck Protection Program (PPP).

The Small Business Administration’s (SBA) release of revised regulatory guidelines that allow all size-eligible gaming entities to participate in the PPP was long overdue and vital to our small businesses. We are incredibly grateful for your steadfast advocacy in correcting the SBA’s antiquated policy that precluded small businesses that generate revenues from legalized and regulated gaming activities from rightfully qualifying for needed relief under the CARES Act.

There is no doubt that without your leadership and sustained effort to get the guidelines changed, thousands of small businesses and their employees would not have been able to survive the effects of the COVID-19 pandemic.

Your continued support of my small businesses is greatly appreciated.

These are extraordinarily difficult times, and the Support Main Street Illinois Coalition is stepping up to help. Because this information on responding to coronavirus is so important, we are waiving SMSIL membership fees until Oct. 1, 2020 and providing this information to you for free in the meantime.