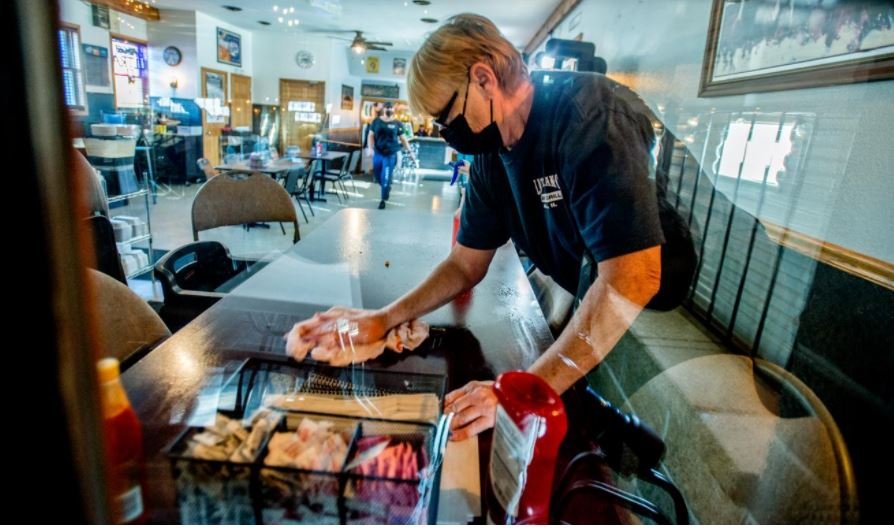 For restaurant and bar owners, there was more on the table Sunday than chicken, pie or your favorite adult beverage.

A third straight day of positive COVID-19 rolling averages above the Illinois Department of Public Health threshold has triggered tighter mitigations for Region 2 which includes the Peoria area.

Starting Wednesday, restaurants and bars cannot have indoor service. That put compliance on the menu.

“To be honest, I don’t know what our level of compliance is going to be,” said Tom West, who owns West Dublin Pub in Pekin. “If we get shut down for non-compliance, or if we are forced to shut down because we can’t continue this way financially, either way it’s the same end for us.”

The Illinois Department of Public Health on Sunday released the latest numbers, which show the region’s seven-day rolling average to be 9.3%, well above the 8% threshold.

“We felt like we were just getting back up to par,” Gil’s Supper Club owner Cindy Smith said. “Now we’re back to square one.”

“There are a lot of people in our industry who are thinking about rebelling,” she said. “I was just in Missouri, at a restaurant, and the tables were inches apart and the place was full. Different regulations in every state. I’m so used to limited seating and distances that I actually turned around and left that Missouri place. I was afraid to risk bringing (COVID) back to Illinois.

“It’s been a tremendous burden for all of us. I feel like I’ve opened eight restaurants this year. We’re one of the lucky ones in that we’ve had a great carryout business.”

Jimmy’s Bar, in West Peoria, will try to operate on its outside patio for a while.

“We can stay open, but when it gets cold?” owner Jimmy Spears said. “We’re in survival mode. It’s either stay open or your livelihood is gone. I’ve gotten PPP loans, and we’re OK for now.

“I’m not a health care professional, so we’ll do what they say. The whole country is facing this.”

West was born and raised in Pekin and spent eight years as a contractor for the Department of Defense in Afghanistan and two more years in Kuwait. He came home in 2017 to chase a dream with his wife opening their own place, West Dublin Pub.

“We opened in June 2018, so we’re still in that critical initial three-year period where you have to get established,” said West, 45. “I have an indoor patio with four garage doors built into it that we can raise to create ‘outdoor’ seating. But I’d have to run my heating full blast in the place. I don’t know if that can work for us.

West said the heart of his business is Scotch and high-end liquor. Maybe 10% of the profit comes from food service.

In general, the new restrictions limit gatherings to 25 people, instead of 50, according to a list of rules and regulations listed as mitigations by the governor’s office. For restaurants and bars, certain heated tents won’t count as outside space, according to Monica Hendrickson, the Peoria City/County Health Department administrator.

“A tent with a heater and all four walls down is considered INSIDE,” she said in an email. “What (defines) a tent inside/outside is the number of sides down. Two sides must be open for ventilation.”

“We urge compliance and smart, sensible actions by the public and our business owners,” he said.